On the following week, the Chinese, Korean and Vietnamese will be celebrating the Lunar New Year. Supposedly, it is just another cultural festival, until you found out that one-third of the world’s manufacturing capacity, from the factories in China and Vietnam, to the high-tech plants in Taiwan and South Korea, to Chinese-owned businesses across the world particularly in Thailand, Philippines, Indonesia and Malaysia, would be partially shut down during this period.

http://www.wix.com/blog/wp-content/uploads/2013/02/new2.jpg
When the world’s manufacturing hub stop working for a week…

Many Asian countries will be in holiday mode all next week, with most businesses grinding to a halt, stock markets in financial hubs like Singapore and Hong Kong closed, and millions of people on the move to be with friends and family. Lost productivity from workers caught up in the festivities disrupt trade flows everywhere from Latin America to Africa and the Middle East.

This global celebration is also becoming a greater challenge for U.S. businesses with each passing year. When millions of people stop working in the planet’s manufacturing epicenter, the world suffers from shortages of goods. This is becoming more apparent as Asian producers increasingly take up market share from the rest of the world.

American retailers such as Macy’s and The Container Store are forced to adjust operational supply chains to ensure they don’t run out of stock while their suppliers are celebrating. The Asian-American population might be small compared with the billions in Asia, but they are still the fastest-growing, highest-earning and best-educated racial group in the USA. The shut down caused by the Lunar New Year affects all the Fortune 100 (biggest 100) companies in the U.S. From multinationals down to small businesses across America, managers are complaining about delayed shipments and lost sales. “Even though we planned for the New Year holiday and ordered early, my supplier in China couldn’t get to my order on time,” said Andrew Green, owner of Glow Universe, which sells glow-in-the-dark party supplies.

Green said he ordered 1.5 million glow sticks and was hoping the shipment would arrive in mid-January. But the factories in China said they couldn’t make that deadline. As soon as his order is ready, Green said he would need to shell out additional money to expedite the shipment to the United States. His hope is that the products arrive in February or else he could lose crucial post-Christmas sales during what is already the slowest time of the year for his company.

“Ten years ago, we had 20 factories willing to supply us with glass for our candles nearing festival period,” said Mei Xu, owner of Chesapeake Bay Candles. “Now we have five.” Xu, whose candles are sold in American retailers like Bloomingdales, Bed, Bath & Beyond and Kohl’s, has been importing from China and Vietnam for 17 years. So she knows how the Lunar New Year - which is celebrated in both countries - can hurt a small U.S. company. An empty factory - no one working at all

But these newer economic trends are making it even more difficult to conduct business there around this time of the year, she said. Mike Brey, who owns two companies that import from China, said he is “doubly kicked in the butt by the Chinese New Year shutdown.”

One of his companies, Brey Corp. operates five Hobby Works stores in the United States that sell imported goods, such as model trains, telescopes and planes. Another business, WingTOTE, supplies Chinese-made tote bags to American retailers.

“Last year, we placed our spring orders extra early in December to avoid the New Year problem,” said Brey. “We still didn’t get new product.” Brey said the factory contracted to make his products was overwhelmed by a surge in demand from other businesses that also moved up their orders early. “We’re the little guy,” said Brey. “The factory took care of orders from bigger clients, like Wal-Mart and Target first. They couldn’t get to us before the holiday and bumped us.” 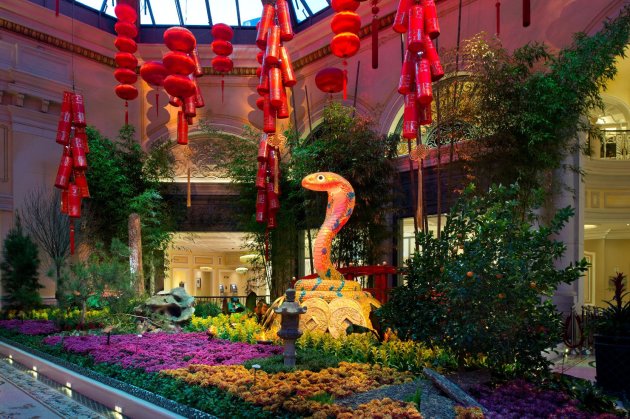 Interestingly, statistics from the Department of Commerce show it is also the best time of year for the U.S. to cut the trade deficit with China. Last year’s Lunar New Year figures show the trade deficit with China falling from $20 billion in January to $15.2 billion in February when the celebration takes place. Since 2007, the first quarter consistently delivers the narrowest trade gap of the year between the two global powers.

In crisis-hit Britain, Prime Minister David Cameron, hoping to attract more Chinese capitals to prop up the recessed economy, sent his wishes to those celebrating the Chinese New Year. “As we welcome the Year of the Snake, the celebrations here in Britain will remind us once again of the richness of Chinese culture and the incredible contribution that our Chinese communities make here in Britain,” he said in a video clip on the official website of the Prime Minister’s office.

“Britain’s link with China are becoming ever stronger and ever deeper,” he said. “As the most open economy in Europe, I want Chinese investors to know that Britain will remain a voice for openness and a force against protectionism in the EU now and in the years ahead.” In 2011, Chinese investors injected about $65 billion into Europe. In what is likely to please Britain, the Chinese embassy in the UK said China’s investment in UK will be ‘explosive’ this year.

From 2011 to 2015, the industries in UK need a capital worth about $325 billion for the infrastructure sector. Since the financial crisis, domestic businesses are increasingly unable to provide that capital.

the last picture , where is the world is that , amazing @@