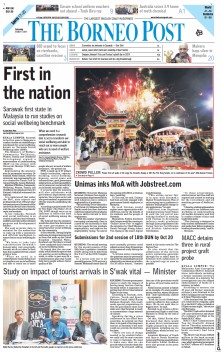 10/7/2017: HOME: Strive for educational excellence, Telang Usan rep urges rural students
MIRI: The progress of a nation is dependent on the educational development of her people, said Telang Usan assemblyman Dennis Ngau. “Hence, our leaders have always stressed on the importance for especially the younger generation to always strive for… (read more)

10/7/2017: HOME: Work towards solving frequent flash floods affecting Miri Tua Pek Kong Temple, local authorities told
MIRI: Miri City Council ( MCC) and the state Drainage and Irrigation Department ( DID) have to come up with an effective solution to address the drainage problem at the oldest Chinese temple in the city, the Tua Pek Kong Temple. Assistant Minister of… (read more)

10/7/2017: HOME: Early detection of breast cancer crucial to save lives — Dr Zulkifli
MIRI: How often do you selfcheck your breasts, as an early precautionary action against breast cancer? How much do you know about the symptoms of breast cancer? Who are at risk and how to deal with it? According to Miri Hospital head of Surgical… (read more)

10/7/2017: HOME: Extremists not welcome in Sarawak — Kim Shin
MIRI: Extremists with an agenda to disrupt harmony and stability in Sarawak are not welcome in the state, said Assistant Minister of Tourism, Arts and Culture Datuk Lee Kim Shin. He said the unity among Sarawakians will not be shaken, but instead… (read more)