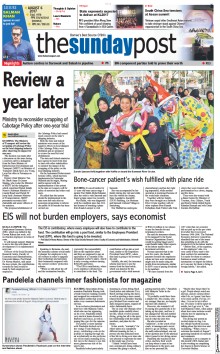 8/6/2017: HOME: Youth unconscious in bedroom, alarmed mother calls for help
MIRI: A woman from Taman Permai in Jalan Dato Permaisuri 2C, Bandar Baru Permyjaya here was alarmed when she found her 20-year-old son unconscious at home last Friday afternoon. She has apparently gone to check on his son in his room around 4.14pm… (read more)

8/6/2017: HOME: Housing contractor denies being paid for work not carried out
SIBU: A housing contractor in Miri has denied it did not carry out painting work for a housing project there despite having been paid by the Housing Development Corporation. State PKR chairman Baru Bian had brought up the issue which was cited in the… (read more)

8/6/2017: HOME: Children of Pibakis enjoy a day of fun when visitors call
MIRI: It was a fun-filled day for children at the Association of Parents With Special Children (Pibakis) centre in Lutong following a visit from Sarawak Bank Employees’ Union (Sbeu) Northern Region yesterday. The group of visitors headed by Sbeu… (read more)